skip to main | skip to sidebar

WELCOME TO THE TEAM

I would like to welcome to the LocalBrandbuilderPro team Lisa Sobol from Reno Nevada and Gary Villalobos from Modesto, CA. It is going to be a blast helping to promote these businesses with people of this caliber. I would like to thank Lisa for being such a gracious hostess for Lynn Sampson and myself on our recent trip to Reno. It looks like we are putting together a multimedia ad co-op with some of the more aggressive locally-owned and operated merchants there in the Reno/Sparks area. Will be training a team in Reno on the 18th and 19th of December at the Montebello clubhouse, 15200 Summit Ridge in Reno. Looking forward to the training with Sam, Dave, Tom, Lisa, Gerry and Troy. Check out LocalShoppingRewards.com and Brandbuilder Academy and LBBPromo.blogspot.com
Posted by Stan C. Countz at 10:38 PM No comments:

In Search of the perfect BBQ by Lynn Sampson 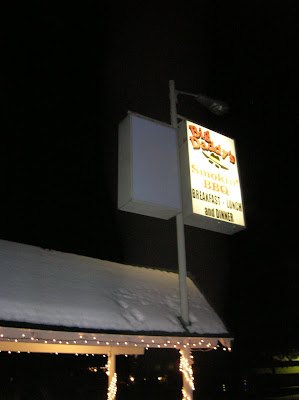 I grew up in Colorado loving good BBQ. In the uncultured bastions of America, BBQ is a religion. The BBQ feast is a family ritual and a cherished part of our heritage. It is a culinary obsession. The perfect BBQ sauce on smoked meat is the Holy Grail of cooking south of the Mason-Dixon Line and west of the Mississippi. I spent four years apprenticing as a chef and another six working in the fanciest restaurants imaginable, yet I never tire of eating barbeque. I can never get my fill. I’m a trained French chef, and I will pick a plate of good barbeque any day over Coq au Vin. It’s in my DNA.

I’m always on the prowl for the next great BBQ restaurant. They come along far too infrequently. I searched out one candidate recently in the mountains of Northern California’s Mother Lode. This particular restaurant lies deep in the Sierra Nevadas and shares a dining room with a pool table. Loud country music is obligatory and a noisy bar is only steps away from your dining table. It is all part of the country ambience.

All great BBQ restaurants have a cloud of aroma permanently resting over them. That’s how you tell them apart from the touristy pretenders. That aroma is a dead giveaway. A strong, moist smoky smell is the best part of dining at a true BBQ restaurant. It is more seductive than the finest French perfume and more addictive than any drug.

The next best thing about BBQ restaurants are the portions. For the price, there is no better bargain. For the same amount you would pay for a meal anywhere else, you get twice the food. BBQ restaurants don’t skimp. They can punish you with their huge portions.

By far, the most important thing about a BBQ eatery is its sauce. Each restaurant jealously guards its own recipe. There are as many varieties as there are stars in the sky. Everybody has their all-time favorite. Every restaurant has a new take on how to make the perfect BBQ sauce. Launching out into the world to sample BBQ is a voyage of discovery. No two places are the same. In the end it is impossible to tell which BBQ sauce you like best. They are all good. Each has its devotees. One restaurant will rely heavily on molasses and brown sugar, another on tomato sauce and garlic, another on Worcestershire and anise. At Big Daddy’s Smokin’ BBQ in Sugar Pine, California, they do it completely different. Tomatoes, garlic, and molasses take a back seat to their secret ingredient, one I’ve seen nowhere else – wine vinegar. Basing your BBQ sauce recipe on a flavored vinegar creates an unusually tangy concoction. The meats are expertly smoked, however, so it all works out. The tart BBQ sauce is a shock, but one to which you quickly adapt.

The side dishes at the BBQ restaurant are often even better than the entrée. A special recipe for baked beans and cole slaw is a must for any respectable BBQ eatery. Big Daddy’s is no exception. As a testament to just how good the baked beans are when my order arrived, I finished mine off before I even began attacking the ribs.

So add this place to your travel plans. It is worth a special trip.

MODESTO’S GEM OF A VENUE 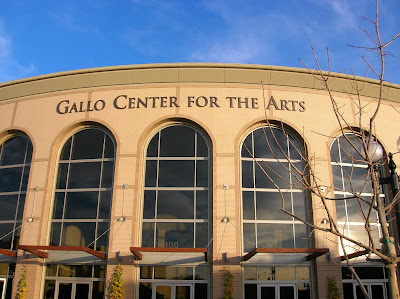 by Lynn Sampson
A jewel needn’t necessarily be a diamond or ruby or sapphire. Sometimes a jewel can be made of ordinary brick and mortar and be just as resplendent, faceted, and bright as any gemstone. Within the confines of the Gallo Center for the Arts is the spacious main stage theater and a modest- sized chamber theater. A breath-taking atrium frames the whole affair with a wide, high elliptical façade facing out onto the street. It is a magnificent edifice. It is, in fact, a jewel. The acoustics in the main stage auditorium are excellent. The lows are rich and mellow. The midrange is clean, and the highs are clear and crisp. Sight lines are perfect from every angle. Audience members will experience the greatest rush by simply entering the cavernous lobby and then taking their seats and gazing at the sweeping ceiling and expansive stage, long before the first note is sounded or the first line is spoken. Must see events at the Gallo this season are: Aquila Theater "Comedy of Errors" by William Shakespeare, March 20, 8:00 p.m.; jazz legend Chick Corea, March 24, 7:30 p.m.; singer Lynda Carter, April 4, 8:00 p.m.;guitarists The Assad Brothers, April 25, 8:00 p.m.; sitar master Ravi Shankar, May 11, 7:30 p.m.; Tango First Century, May 15-16, 8:00 p.m.; and street dance troupe Stomp, May 29-31, 8:00 p.m.

BEST SEAT IN THE HOUSE 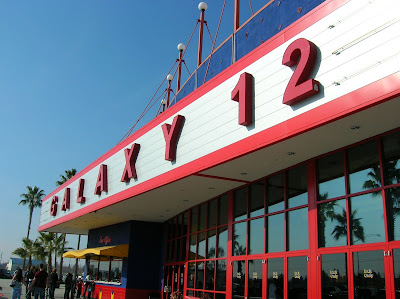 by Lynn Sampson
In case you hadn’t noticed, movie ticket prices are approaching $10. If you are going to spend a small fortune to see a movie, you might as well do it at a place with comfortable seating. I recently watched a movie at a large Cineplex in my hometown. The seating made me believe I was trapped in a Greyhound bus. I could not avoid my knees knocking against the back of the seat in front of me. After two hours of this cramped discomfort, I resolved never to return. My suggestion is that you avoid that as well. I encourage you to go to the Galaxy Theater in Riverbank. Its seating is wide and spacious. A two-and-a-half-hour movie will not tax your comfort and the sound and picture quality are first rate. Why suffer elsewhere? Go to the Galaxy and have it all. Here are my picks for spring 2009: for March, "Race to Witch Mountain" (PG) and "Duplicity" (PG-13); for April, "17 Again" (PG-13); for May, "Star Trek" (PG-13) and "The Hanna Montana Movie" (PG).
Posted by Stan C. Countz at 9:34 AM No comments:

LIFE IS GRAND IN TRACY 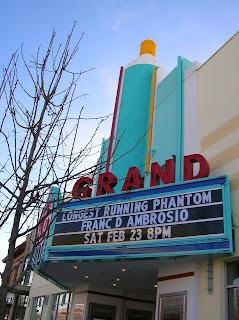 by Lynn Sampson
Nowadays, a town isn’t considered grown-up until it gets its own art center. Tracy, California, got theirs. The Grand Theater is a marvel. It is, in fact, a $20 million marvel. It is a perfectly restored 1920s era theater along with a gallery, nine art, dance and music studios, and an experimental theater. It is a striking example of civic pride. What started life as a movie palace 80 years ago is now a state-of-the-art performing arts complex. Recently, I attended several performances there. I sampled intimate jazz as well as a boisterous musical, both presented in the main theater. There are no bad sight lines, and the acoustics are excellent. There isn’t a finer place to view plays or listen to music than the Grand. These are my personal favorites among the films, exhibits, and events coming up at the Grand: Guitarist David Burger, April 11, 8:00 p.m.; Gilligan's Island, The Musical, April 17-18, 8:00 p.m.; and Duo Concertante (piano and violin), May 8, 8:00 p.m.
Posted by Stan C. Countz at 9:11 AM No comments: 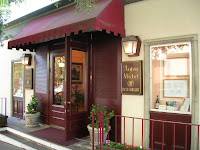 ANTON AND MICHEL'S
Too often ritzy restaurants are very disappointing. The servers are sour and distant and the food isn’t much better than adequate. I have always found it risky going out to dine at pricey eateries. Too often I leave angry and penniless. It was with great pleasure that I recently found an exception to that rule in tony Carmel.

Anton and Michel’s is one of Carmel’s most respected eateries. In it you will find a staff that is amiable and sincere and food that is tasty without pretension. Of course, it’s expensive. Of course, the décor is dreadfully chic. Of course, the atmosphere is glumly refined. What else would you expect? The whole experience put together, however, is sublime.

If you elect to shoot your paycheck on a night out at an elegant restaurant, there is no better place to do it than Anton and Michel’s. The environment is comfortable and the menu is sensible. You don’t have to speak French to order and no Matre’D is going to scowl at you. For romance and understated elegance, there is no better place. There are no unpublished novelists or fledgling actors on the wait staff. The hostess is not foreign born and the chef is not on loan from Chez Panise. Everything at Anton and Michel’s is down to earth, professional and human. The food is traditional and appetizing. The whole experience is lovely without being cloying and gracious without being arrogant. That’s what I call a great restaurant. I think you will agree. Anton and Michel’s, Mission and Seventh Streets, Carmel, CA, (831) 625-2406.
Posted by Stan C. Countz at 2:05 AM No comments: 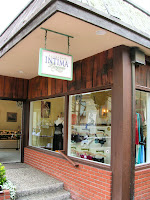 Every woman once in her life should wear a pair of $100 underwear. Every man once in his life should buy them for her. In Carmel there is a shop that will provide that service. Intima is a high-end lingerie shop where underwear is an art form. Throughout my adolescence I suspected that the traditional seven arts – painting, music, dance, drama, architecture, literature, and sculpture – were one short. In my opinion, frilly lingerie deserves a place along side the cantatas of Bach and the paintings of Rubens. The designers who fill Intima’s shelves with the latest styles of unmentionables are visionaries. In the bare 350 square feet of this tiny outpost of steamy sexuality can be found artistic masterpieces the equal of oil paintings or sculptures available at any of Carmel’s art galleries. These works of art are less expensive, but not by much. A bra can set you back $90. Panties easily cost $80. A nightgown can cost the price of a fancy dress.

The most common criticism of pricey lingerie is that few if any ever get to see it, so why bother. Remember that the treasures of Tutankhamun and Elizabeth Barrett Browning’s “Sonnets from the Portuguese” were never meant for public consumption either. Just because a thing is private doesn’t mean it shouldn’t be treated with as much care and attention as something in the spotlight. Maybe it is enough to know that only the right people will see it. That’s the way it is with lingerie. Just knowing it’s there is enough – for her and for him. Sexy lingerie is a precious secret. Intima, Mission and Ocean Streets, Carmel, CA, (831) 625-0599.
Posted by Stan C. Countz at 2:00 AM No comments:

Stan C. Countz
has produced a TV show called Valley Views Spotlight and published Valley Views magazine, a full-color, slick-stock regional magazine by, for and about the central CA area. Worked in TV and radio since the late 70's.

Richard Berlanga: ex-mafia boss shares his vision of the future.